This is another one of my delayed entires.
I should have posted this at least a week back, but due to my vertigo attack, I was unable to finish writing it.
Here it is at last.

Today les boot was on the other foot, so to speak.

Back in March I went on a day trip to Paris to see the locations used in City Of Death. This weekend I returned the favour and gave a guided tour of London to Jonathan, the tour guide I had in Paris. All this ironically only two days after attending a guide tour of Cardiff myself!

I had organized a two-day tour back in February for my friend Bob Mitsch while he was over here for the Time Quest 2 event, so I have a good idea of where to go and what to see, though I have a couple of special requests to include as well.

Now, as much as I’m pleased to see Jonathan again, today wasn’t really the best day to choose for this by any means: I have had a manic week which included a Bonhams Auction, a trip to Cardiff, as well as my birthday! - AND tonight it’s Matt Smith’s season finale - and I’m afraid I fully intend to be home for that regardless!

Anyway, Jonathan and his brother had bought their EuroStar tickets before telling me the date, and since they are non-refundable and non-transferable, the day will have to happen as they need, though not as long as planned and I will have to head home by 5pm in time for the episode.

I met them bright and early off the 8:30 train at St Pancras, which was thankfully on time. Our day was pretty packed, so we heading straight off for our first location: an old traditional greasy spoon cafe on the Farringdon Road. So what Doctor Who story was this in?

Well, none actually, but one thing on Jonathan’s checklist was to have a typical English breakfast, which he thought was beans on toast. Now I’ve never had that as a breakfast myself (maybe an afternoon filler or a lazy dinner), and I know of no-one does.
So we had a full English breakfast instead – a real artery-clogger (see left)! 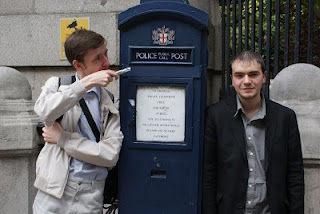 From here we walked to St martin Le Grand, to see the first of the two surviving original period Police Posts in London. It hasn’t been in commission for many years, but it’s great that it has been kept as a reminder of times past (see right).