Invasion of the Aussies

A long term client of mine, Ian Cummins, was in town this week. 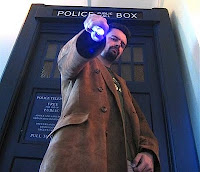 He’d been on a bit of a world tour, flitting between the UK, Ireland and the US, inspired by his need to attend a family wedding in Ireland.

In the course of his trip he’s been to the UK, Ireland, over to America, and now back to the UK.

Knowing he’d be around at some point I extended an open invitation to meet up if he had a free day.

Over this past weekend I had a message from him that he was gonna be in London for Monday, and if I was around we could finally meet.
Annoyingly I was still on a placement at a trendy advertising agency on Tottenham Court Road, so I wasn’t free that day, but I suggested we could do lunch if he could be around at 1pm. 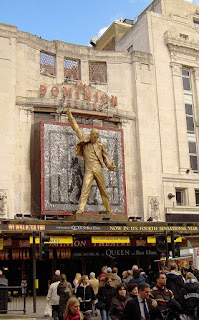 I suggested we meet outside the Dominion Tottenham Court Road, which is a good meeting point in the area.
I have often noticed slightly vacant looking tourists standing around outside there, so have assumed they were also waiting for meeting colleagues to arrive!
The dominion is notable at the moment for being where We Will Rock You is running, a stage musical based on the songs of Queen. It’s easy to spot, as it has a near 30-foot high statue of Freddy Mercury outside (see right). “Look out for that!” I told him, “You can’t miss it!”

I broke for lunch as planned at 1pm and headed down to meet him and to be as conspicuous as I could be I wore my Ten Coat, hoping he’d spot it.
As I walked down the road I spied a familiar face, a good hundred yards or so from where we were supposed to meet. “Ian?”, I said. “Yes?” That was lucky – we’d have been standing around wait for each other for ages!