It’s nearly December, and that means yet another Bonhams Entertainment Memorabilia sale.

As usual Doctor Who gets a look in, with a range of eras represented, including a stunningly colourful poster for the second Peter Cushing Dalek film, Daleks Invasion Earth 2150AD.

Since both these series had the bulk of their runs alongside the Tennant era, I have listed them here in full.


Bonhams sale 1793
(12th December 2012)
Entertainment Memorabilia
As usual I have separated the items by Doctor era, and you can see the rest of the items here:

Lot 150
Torchwood, Series 1 - Countrycide: A scale prop corpse model, with a slit-throat rolled in plastic sheeting, 2006, with numerous abrasions and cuts to the body, made of rubberised foam latex, splattered with fake blood, modelled to be hung by the feet, length - 72 inches (183cm.)
Estimate: £200 - 300
Sold for £250

READ MORE
Posted by Steven Ricks Tailoring at 10:03 No comments:

Since the beginning of the year I have presented a series of exclusive interviews and Q&As with Tenth Doctor costume designer Louise Page. 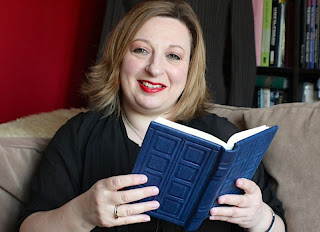 Louise has been very supportive and happy to discuss a number of topics form her time as Doctor Who costume designer.

I can’t thank her enough for talking about the Tenth Doctor’s Ties; revealing the makers of The Doctor’s Glasses; dressing the Fifth Doctor for Children In Need; and making the Sancturay Base Space Suit. 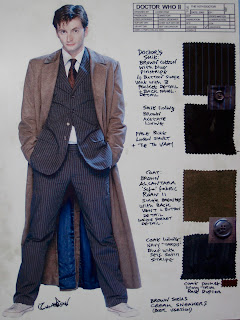 But how did she get the job of dressing The Doctor? What were her original thoughts on how he should look?

Today I have the first of a three part look at Louise’s pitch.

In the first part, she explains how she presented her initial ideas to Executive Producer Russell T Davies and Producer Phil Collinson.


Posted by Steven Ricks Tailoring at 09:41 No comments: