It’s nearly December, and that means yet another Bonhams Entertainment Memorabilia sale.

As usual Doctor Who gets a look in, with a range of eras represented, including a stunningly colourful poster for the second Peter Cushing Dalek film, Daleks Invasion Earth 2150AD.

Since both these series had the bulk of their runs alongside the Tennant era, I have listed them here in full.


Bonhams sale 1793
(12th December 2012)
Entertainment Memorabilia
As usual I have separated the items by Doctor era, and you can see the rest of the items here:

Lot 150
Torchwood, Series 1 - Countrycide: A scale prop corpse model, with a slit-throat rolled in plastic sheeting, 2006, with numerous abrasions and cuts to the body, made of rubberised foam latex, splattered with fake blood, modelled to be hung by the feet, length - 72 inches (183cm.)
Estimate: £200 - 300
Sold for £250 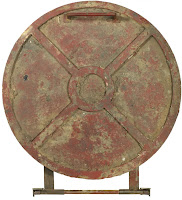 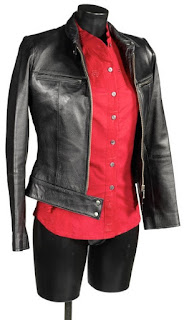 Lot 159
The Sarah Jane Adventures, Series 3 and 4 - Prisoner of Judoon/ The Vault of Secrets: An Androvax costume, 2008 and 2010, comprising; black biker style jacket and matching trousers, in cotton/ synthetic mix fabric, with crocodile skin effect finish, the trousers with elasticated braces , the jacket with foam latex spines to shoulder and back seams with silvered buckle to front, a pair grey leather biker style boots and undergarments including black lycra vest, together with two 'straight' jackets of heavy grey cotton, with applied painted symbol motif and silvered buckles, all pieces with original BBC stock numbers
Estimate: £300 - 400
Sold for £450 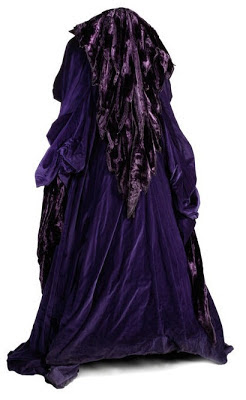 Footnotes
'Death of the Doctor' is one of only two episode of the SJA to feature Matt Smith as the Doctor. The Shansheeth are a species of Vulture type creatures.

Footnotes
This is the second registration to feature in the show, but remained Sarah Jane's vehicle until the series ended in 2011.

Created due to the burgeoning interest in European classic cars amongst Japanese car collectors in the 1980s, Nissan produced four retro inspired cars emulating 1960s European styling but incorporating up-to-the minute Japanese technology. Previewed in 1989 and launched in 1991, the Figaro was the fourth of these. A turbocharged, Micra-powered sportscar, it was soon in such demand that a lottery was organised to determine the lucky owners of the limited run of 20,000 produced.

Posted by Steven Ricks Tailoring at 10:03