Today I’m going to the London Film and Comic Convention at Earl’s Court, and since I’m gonna be in London anyway I thought I’d go along to the BritTours Doctor Who tour.

We have to meet at Temple station on the Victoria Embankment, and the tour is by bus so we can take in so far flung locations.

First up is St Peter’s Steps, which lead up to St Paul’s Cathedral. This was seen in the cliffhanger to an episode of The Invasion, the 1968 Cyberman story with Patrick Troughton. I had been here a number of times before, and seen it prior to the remodelling that took place which saw the office block to the right change from glass to red brick; and the construction of the Millennium bridge, which spans the Thames to Tate Modern close to The Globe Theatre on the south bank. 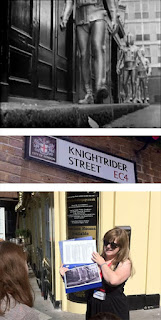 What I hadn’t seen before was the manhole cover out of which the Cybermen are seen burt at the start of the sequence; and the pub further up the steps where they are seen walking past at the end of the scene. The street has the most amazing name - Knightrider Street, which substantially pre-dates the American 1980s tv show I’m sure you are thinking of right now!

READ MORE
Posted by Steven Ricks Tailoring at 08:26 No comments: