Serendipity Of The Doctor

This weekend I attended the Tenth Doctor celebrations at the BFI, where they screen the season four finale, The Stolen Earth and Journey’s End. 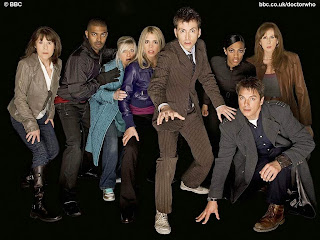 I had a great time, but I do have a funny story that proves things sometimes work out for the best, even though they don’t look like it at the time.

Don’t ask me how, but I have managed to get myself on the guest list for the last few screenings in the BFI's Doctor Who At 50. After all the stress of missing a couple of the earlier screenings, it’s a relief to not worry about getting in. Or so I thought.

The guest tickets are only issued on the day, and can only be collected 30 minutes before the show starts.
So this time we arrived with around 20 minutes to spare - wandered up to the ticket desk - gave my name - and discovered someone else had already collected my tickets!
We’re not talking about giving them out in error - we are full-on name check and hand over. I was stunned. Who could have taken my seats?

Now, in all fairness to the BFI they were on the case straight away. Senior staff were called. Those in charge of the door were alerted and anyone trying to enter with L14 and L15 were going to be in SERIOUS trouble!
We were told to hang around near the entrance, so we could be on hand once it was resolved. It was so funny, as I could hear the staff muttering about L14 and L15. It was like an all-point border security alert!

With only 5 minutes to go it was decided we should be seated and if someone tried to take our seats we were to send them packing!

So finally in we were relived.

Then a friend I have only recently become reacquainted with waves at me, revealing HE has my tickets!
Ends up a couple of friends of his have seats next to us and he was keen to swap so they could all sit together. The seats he had were closer to the front, but he'd forgo those in favour of ours.

Not being an arsehole I agreed we’d change seats, having accepted his apology. 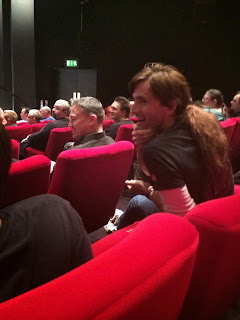 Anyway, lights down. Show starts, and I notice there are still some spare seats dotted around where we are sitting.

Skip forward to the second episode which followed a interval interview with Andy Pryor, the casting director for the series, and just as the lights go down and the episode starts two people slip into some spare seats just in front of us. It’s only David Tennant and Georgia Moffett!!!

By the time the episode was done Georgina had disappeared, leaving David on his own, but was soon joined by Catherine Tate. 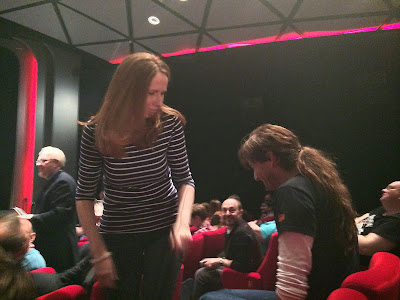 It takes a few minutes to get set up for the main panel discussion, during which a few fans were asking David for autographs.

I had only brought none thing with me with a view to getting a signature - a screen-used fake bank note from The Runaway Bride bearing David's face. 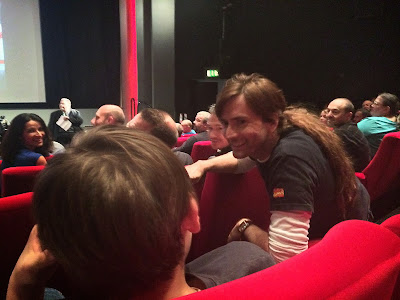 All I had to do was lean forward a bit, not even standing from my seat, and it asked David if he’d sign for me. He happily took the note and my pen, signed and passed it back. Catherine was happy to sign too! 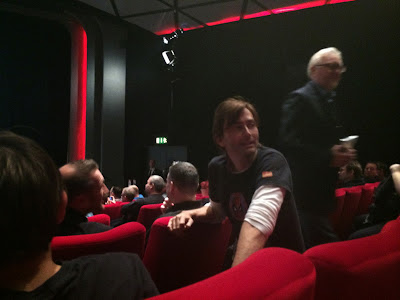 So you see, sometimes things DO work out for the best, and there’s no point being an arse and refusing to be a little flexible with friends - even if they have annoyed you a bit.

Posted by Steven Ricks Tailoring at 15:15 No comments: