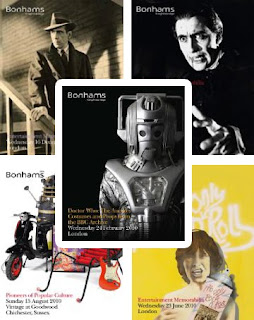 Having attended a number of the Bonhams costume and memorabilia sales lately, especially the dedicated Doctor Who sale, I now seem to be on their mailing list!

Don’t get me wrong – this is a good thing, cos at least I’m being kept up to date with future auctions.

This week I received a letter from Stephanie Connell, the head of the Entertainment Memorabilia department. The next major sale will be on 15th December and Bonhams are holding a series of valuation days out of London to drum up some possible sale items.

As an indication of the type of stuff they are looking for, Doctor Who was top of the list, with ‘horror and Sci-Fi related’ mentioned too.

If you have something they might be interested in, and can’t get down to London to have it appraised, this is the perfect opportunity.
The dates are as follows: