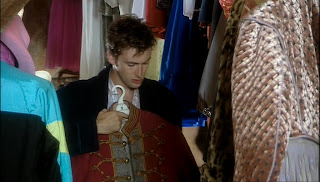 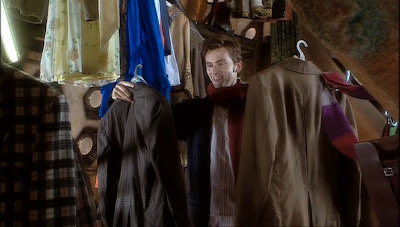 Sadly though, apart from the scarf, there is nothing relating to previous regenerations here, which is a little disappointing.

Anyway, now he’s fully kitted out in his new clothes, do we finally get to see the full extent of the new Dressing-up room! (see below) 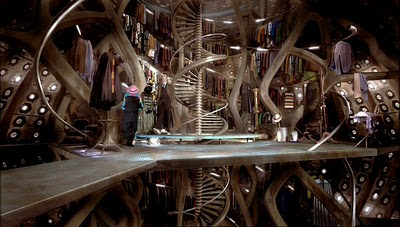 But it is THIS shot that houses what we have been looking for . . .
The area to look at first is to the right of centre. This is where the CGI takes over – and the costume spotters can have a field-day! 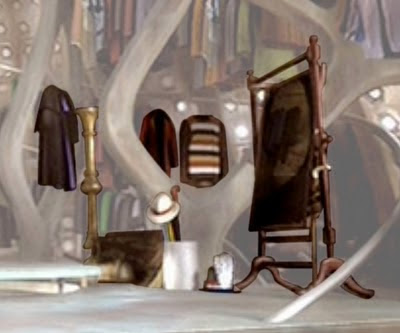 I have been reliably informed by the effects artist who did the shot that you can see the following, from left to right:


Jon Pertwee’s Inverness Cape from Terror of the Autons

A large brass/gold lamp stand seen in the console room from various Hartnell and Troughton stories including Power Of the Daleks (see right, top)

The Sixth Doctor’s coat in the shadows behind the pillar

The mirror that the Fifth Doctor viewed his new costume in from Castrovalva (see right, bottom)

In front of all this there is also:


A chest, again seen in the console room from Power of the Daleks, and in front, Second Doctor’s tall hat (see right again, top)

In the silver bucket:

. . . next to Seventh Doctor’s umbrella (see left, middle top) – if you look at the top right corner of Davison’s hat you can see the question mark is facing backwards

To the right of this on the floor is the First Doctor’s hat from Reign of Terror with the big white feather (see left, middle bottom)

And leaning against the right hand side of the mirror is the First Doctor’s twisted walking cane, used in a number of stories including The Aztecs (see left, bottom)

But amazingly that not all.
If you look to the lower level you can also see:

I am also told there are other bits hidden amongst the the generic stuff, but such that they cannot be recognise, but this did include a kilt to represent Jamie and one of the green coats is intended for the Eighth Doctor.

I never knew that SO much had gone into this blink-and-you-miss-it shot, but I guess this sort of stuff is there for the fans – and the DVD pause button!

Posted by Steven Ricks Tailoring at 12:56