Planet Of The Dead bus - bits on eBay!

Usually I bring you items I have spotted on eBay that are at the least screen-used props or costumes.

But this month there is the most extraordinary item for sale on eBay - the bus from Planet Of The Dead.
Not as a buy-and-drive vehicle, but as a series of breakers yard bits and pieces, from number plates to wing mirrors.

Two of the buses were original in the listings for the Bonhams auction back in 2010, but were withdrawn before the sale.

Here is what the seller has to say about their background.

The BBC sourced a total of three buses to film this episode:-
RUA 461W - This bus was purchased a shipped to Dubai, upon arrival at Dubai it was accidently damaged by a crane, the bus was used for filming though. It is thought that this bus was scrapped upon completion of filming. It is almost certain that it never came back to the UK. All the external shots in the desert are of this bus

GGM 84W - This bus was purposefully damaged to mimic RUA 461W and then used at the BBC's Cardiff Upper Boat Studios for all the internal shot. A sceane in Dr Who Confidential clearly shows this bus with the roof removed being used for filming.

All the buses had the number plate W974 GHM for filming, but a continuitty error in the filming the flying sequence saw RUA 461W also used.

I purchased both HJB455W and the GGM84W off the BBC in January 2009. HJB 455W has been returned to running order and kept in Dr Who (NEON) livery! and GGM 84W has slowly been stripped for spares. I am now listing what I consider to be some of the more interesting parts of the bus, please see my other auctions as there are more parts for sale, and more to be listed in the next few days.

In the photographs is a copy of the V5 showing the BBC as the previous owner, and a picture of GGM84W and HJB455W (The complete bus) at Upper Boat of the cold and frosty morning when I collected them. This is a genuine sale. 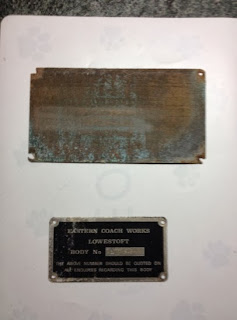 CHASSIS AND BODY from GGM 84W