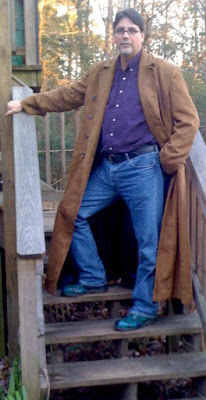 The attention to detail is stunning! After having read Steve’s blog about his adventures in Doctor Who costuming, I understand why Kirsten commissioned him to make the coat. Only a true fan could create such an amazing garment. Steve’s obsessive attention to detail has made for a truly remarkable coat and experience.

I have never had a custom coat made before and am thrilled at the outcome. I have worn the coat almost daily (quite a feat with our normal temperatures) to work as well as just knocking about since opening the box. For all considering a custom coat – run to your nearest email box and send Steve an email. He will do you a fine job!