Now, I am also a realist.
That means that sometimes, just sometimes, you have to compromise and use an alternative if the goal you are aiming for is truly unobtainable, or just not justifiable on a budget. But it has to be a good alternative.

But occasionally, even finding the perfect materials can be double-edged sword, especially when it does not live up to expectation.

The Alcantara is a case in point.
Ever since the costume design display at the Earl’s Court exhibition last year, a hand-written note (see right) caused a frenzy of forum activity, and the hunt was on to find out what it meant, and ultimately track down the fabric the coat was made from.

I hunted high and low, and despite the main Alcantara range being easy to find, it lacked the colour needed, and just lacked the texture and feel of the coat I had seen at Earl’s Court. 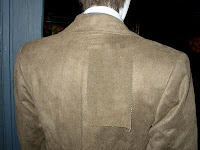 Ultimately I did find a range from Alcantara that is a good match and I got a swatch to take along to compare to the coat on display (see left).

Under the rules of if it seems easy, it’s not, the fabric soon proved to be from a discontinued range, with no supplies in the UK, so I had to import it across Europe at enormous expense, bringing the cost to over £75 a metre. Ouch!

Although I had found the fabric, this particular range came in two versions: one for ‘fashion use’ which draped quite fluidly; the other for ‘upholstery use’. Annoyingly it was only the latter that I could track down.

Being for hardcore upholstery use meant it came with a bonded hessian backing, which could be torn off in one piece, but this left a coarse glue residue. It proved impossible to remove completely and gave my fabric a stiffness I did not like. The remaining glue also made it a nightmare to work with, since every time I needed to press the coat while making it, the glue would reactivate and stick to any surface it came in contact with.

I did finish my coat (see below), and it looks great, but it is not really a garment I would wear day-to-day. I therefore keep it for best, such as my trip to Hound Tor or my visit to the Land’s End Exhibition. 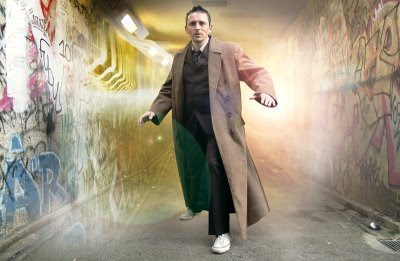 But I’m a perfectionist – so despite making it of the ultimate fabric, I still wasn’t happy with how it felt to wear. 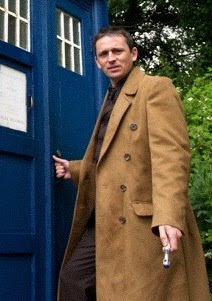 To be honest, I preferred the feel and drape of the Malabar I had been using since the MkII.
The MkIII was a nice coat, though the pattern was not as refined as I cut it for the MkIV, Alcantara version.

So I thought the best thing to do would be to make myself a new coat, this time using the more screen accurate pattern, but making it in the Malabar that I know and love – besides, I didn’t want to be walking around all the time in a coat made from £700s worth of fabric alone!

I therefore made my MkV! 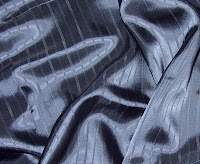 Then in late 2009 a form of mass psychic-cosplay happened!
I thought it was about time I found a self-striped lining and while on a Soho fabric buying run in central London I stumbled across a near perfect double self-striped navy blue lining (see right) in a shop I had visited a number of times before! How I had not spotted it I will never know. However, there was barely a metre left - not even enough for a single drop of lining inside a coat. :(
I bought what was available and pleaded with the proprietor to restock, but he could not remember where he got it, so it seemed unlikely. 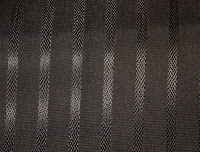 Another shop also stocked a similar fabric, but it was a single stripe and only in a black (see left).

I then had an email from a couple of forum members, firstly from Benjamin Rudman, who wanted a coat made. 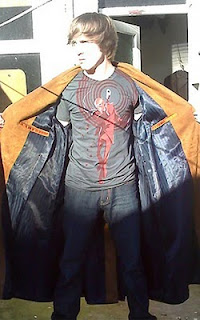 He had found a navy coloured self-striped lining, just like the second one I had found in black. It was being sold by a Los Angeles based supplier, and although it was quite cheap per yard, the shipping and import duties bumped up the price a fair whack.
In the same week another forum member, Daniel Pawlik contacted me with a link to the very same fabric, which by now I had on order.

I made Benjamin his coat (see right), and you can read his review of it under Customer Review - Benjamin Rudman. 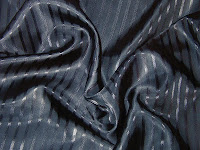 I was very impressed with how the lining handled and its finished look. I was jealous! I wanted one . . . .

However, this time I thought it a good idea to have one last cast around to see if there was anything else fabric-wise I could improve upon. 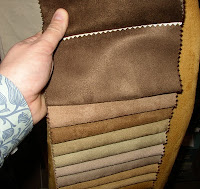 I decided to revisit the Malabar colour range and just check that, now I had the more screen accurate Alcantara as reference, I could maybe find a better colour option to use.
Well, after looking through the whole range (of over 40 colours - see left) I did find something that I felt was in a better range.
Below is a comparison between the fabrics: The Alcantara (centre) with the existing Malabar (left) and my new choice (right).

It is notoriously difficult to compare colours purely by on-screen visuals, but I assure you that having the fabric in-hand, it does feel like much more of a match.

As a further reference, here is a picture taken of my in the Mk III Malabar coat next to the real thing at Earls’s Court. You can see how much darker the real thing is by comparison (see right). 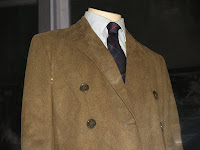 Having said all this, despite choosing a new colour, I still feel my original choice was a good one. As I discussed in What’s In A Colour?, it is just as much about how the colour is perceived, than how it actually looks and compares.
After all, I had taken pictures at the Manchester Exhibition (see left) that were a striking match to the Malabar Walnut.

It was only when I went to the Earl’s Court exhibition I noticed that the lining fabric was actually a little unusual.

Up until now I had been using a plain navy satin lining, but since discovering various self-striped versions, and then being directed towards a reliable supply, I have to use this from now on – despite the expense at importing it from the US.

The costume design on display at Earl’s Court was very specific when it mentioned ‘Rust Dupion’ as the coat pocket lining trim (see right).
Dupion is a form of silk, which I found could easily be found at most high street haberdashery shops, and I bought mine from John Lewis.
It was only once it was in the coat and it was finished (see below, left bottom), that I noticed the type I had used wasn’t as shinny or coarse as the screen used fabric (see below, left top).
A little further hunting quickly found a satisfactory replacement (see below, right), which will give me a better result. 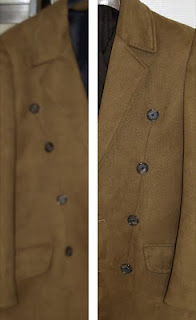 I had spent a disproportionate amount of time trying to find the ‘perfect’ buttons for my coat.

Initially on the MkI, the MkII and Mk III coats I had used standard 1inch (25mm) imitation horn brown buttons (see left, the MkII with 25mm buttons is on the left). These are easy to track down and obtain.

It was when I saw the display coat for the first time ever at Manchester did I realise that the buttons were actually a little bigger than the ones I had used (see right, top). I worked out that they were actually 28mm buttons – ok, I know that there is only a few millimetres in it, but believe me, it makes all the difference!
This was the period when I search literally the world (via the internet, or course) to find them. Ultimately I tracked them down to The Button Queen, only a short walk from London’s Oxford Street.

You can read about my switch to the 28mm buttons in The Mk II - I’m a perfectionist, it’s still not right!
These are the buttons I have used ever since. (see left, the MkIII with 28mm buttons is on the right)

I did notice that although The Button Queen versions were the right size, the proportion of the rim was a little large and could do with being a smidgen thinner (see right, centre).
Well, after another search I have found a near perfect, screen accurate match (see right, bottom) – though it obviously goes without saying that yet again I am having to specially import them from across Europe to get them, making them over £2 each. Since there are 12 buttons on a coat, that hurts! It’s a bit like the old adage:
This is the same hammer my Great Grandfather used, all I’ve had to change is the handle and the head!
Posted by Steven Ricks Tailoring at 07:50