Well today I am up at the crack of dawn – actually even earlier – it’s 4am!

I am off to Paris for a special one-day event at the invitation of Jonathan Le Targat, who co-runs a French Who fansite called gallifrance.free.fr.

A funny series of events have got me to Paris. 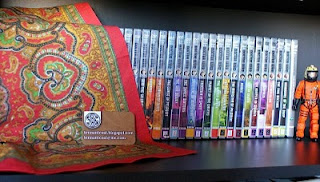 Jonathan contacted back in November to enquire about buying a Seven Hanky. I sent him the details and he was very impressed with what I was doing.
He then said he wanted to ‘partnership’ my hanky with his website – he said his English was not very good – but let’s be fair, his English is much better than my French!

What he was offering was to advertise my hankies on his site so that his members could get access to classic series replica props and costumes. At least, this would happen when the site was revamped and up and running.
Basically, if I could supply some images and a written text about them, he would translate it and add it to the site.

I was more than happy to oblige and received some free publicity in the process.
In return Jonathan wrote a review of the hanky he bought, and you can read that in my Customer Review page.

Then just after the new year he contacted me again, this time talking of giving me a special members card, which would give me access to future paid events for free. I didn’t quite know what he meant, but he was asking for a photograph of myself to go on this card. 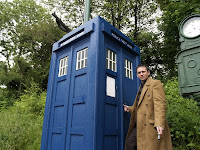 I dug out a picture of me at Crich, posing with the original Police Box they have there, and he was most impressed! (see right)
He later explained that I was a special member of their association – I guess a sort of honorary member. I was very flattered.

At this point he invited me to attend an event he was running on the 27th March 2010 in Paris. It was to be a guided tour of the locations used in City Of Death. Would I like to come.
To start with I wasn’t sure – but since I have been working alone in my little sewing room, with few visitors and only the iPlayer to keep me company some days – I thought it would be nice to get out of the house!
I am also a quick 25 minute train ride from my local station direct to where the Eurostar departs in London and goes direct to Paris. The Eurostar then takes around 2.5 hours to get there – I could do it in a day.

I accepted his offer and looked into getting myself a ticket, which I bought for £89 return. I am one of those people that am more than happy to make a real early start to make the most of a day. To get to Paris by 10am I needed to depart at 6.22am from St Pancras, and allowing for check-in, 4.59am at my local station – hence my 4am alarm call . . .

Jonathan was over the moon and thrilled I was making the effort to come over and join his tour. He was aware of the language difference, and said he would arrange for someone to be with me at all times to translate what was being said, since it would all be in French. He also promised to meet me form the train and make sure I was on my return train for going home.

A final check the week before, to make sure I was still coming, revealed that if I came in my Ten outfit (which I fully planned to do) I would get a lot of attention, especially from the fangirls, who would all want their picture taken with me.

So – I am now on the Eurostar having easily made my local service and check-in at St Pancras.

The only minor hiccup being as I went though the baggage check where they scan your luggage, I had my Group Buy Sonic Screwdriver in the pocket of my coat. My bag was already through, and my coat was following on behind.

The scanner operator furrowed his brow and asked what had just gone through. “It was just a coat”, his colleague said. “But what’s in it?”, pointing at my coat. I puled it towards me and started to put it on. His colleague just stood around doing nothing, so off I went. Phew.

The train left on time, and it didn’t seem to be long before the warm glows of Saturday morning suddenly fell into deepest night as we entered the Euro Tunnel.
At the time I booked my tickets, the train operator Eurostar was getting very bad press regarding a number of trains that broke down in the tunnel due to the cold weather with a full compliment of passengers on board. Obviously I would be going in better times, but I hope it wouldn’t happen again. Then it did – a matter of a few days later another train broke down in a similar way, trapping hundreds of passengers for hours. Both times a lack of communication or urgency to getting people evacuated was a cause of enormous concern.
But in the time it took be to queue, buy and drink a cup of tea, we were the other side and back in bright sunshine speeding our way through the French countryside.
It wasn’t too long before the sunshine gave way to dark, ominous stormy rain clouds, which for the time being were clinging on to their watery content. As we approached the outskirts of Paris a heavy mist had descended and the far from promising forecasts I had been reading over the past few days seem to be coming inevitably true.
Anyway, I was here now, so let’s make the most of it.

We all creeped our way off the train and slowly towards the exit barriers, where an eager face seemed to be trying to make eye contact with me – this was Jonathan.
He was a lot younger than I had imagined, being around 19 or 20. he was around my height and slim. He welcomed me with a warm smile and started to show me the way to the subway so we could get to meet the rest of the tour group.

First we met one of his friends, Cédric at another station, from where we went to Place George Pompidou alongside the Beaubourg Center to rendezvous with everyone else. Already there were two ladies, Isabelle and Maud plus the young son of one of them. His jaw was nearly on the floor when he saw me. He was a BIG Tennant fan, so to see someone in full Ten outfit made his day.

Jonathan then gave me my VIP members card (see right) to his newly formed Who fan club. I was very flattered.

Gradually we were joined by Jonathan’s brother Joël and three more including Benjamin and Victoria, making our total Ten – out of which eight of us were wearing converses! 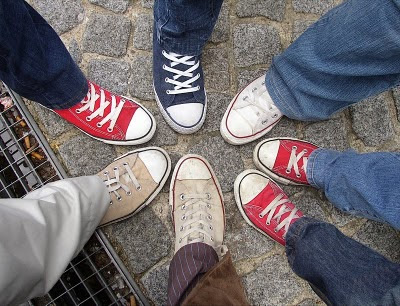 Posted by Steven Ricks Tailoring at 21:52