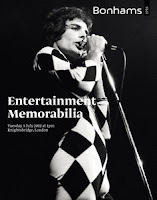 It’s coming to that time of year again, and the summer Memorabilia Auction at Bonhams is due to be held on 3rd July.

There’s not much in the sale of Doctor Who interest – just four items: one 1960s Dalek poster and three costume from David Tennant’s era.

Here are the details.

Bonhams sale 19800 (3rd July 2012) Entertainment Memorabilia
As usual I have separated the items by Doctor era, and you can see the rest of the items here:

Here are just the lots relating to the Tenth Doctor era

Doctor Who - The Runaway Bride, December 2006
Two Roboform costumes, one believed to have been David Tennant's disguise costume worn during the episode, each outfit comprising: a black hooded cape of wool, with Velcro® fastening and split side seam, together with a black wool jacket/coat, the costume attributed to Tennant with a pair of black loafer shoes and a black leather effect belt with large buckle, the other with belt only (2 costumes)
Estimate: £400 - 500
Sold for £1,000
NB This costume was originally sold for £438 at the 15th December 2011 auction (lot 163). Its estimate was also £400 - £500.

Lot 161
Doctor Who - Smith and Jones, 2007: A Slab guard costume,
comprising: a two-piece black leather biker type outfit, the leather jacket with geometric detail to top of sleeves with a pair of trousers, both labelled 'Hein Gericke' the jacket with label inside inscribed 'Matt', together with a pair of leather gauntlet/ gloves and a black cotton T-shirt (5)
Footnotes
The Slab guards protect the Plasmavore, Florence Finnegan whilst she is on Earth.