There’s not been many original Tenth Doctor items on eBay recently, but here was one I did come across. 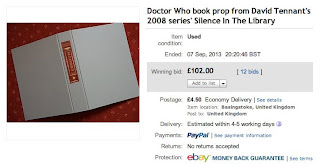 Silence In The Library
library book

SOLD FOR £102
Doctor Who book prop from David Tennant's 2008 series Silence In The Library / Forest Of The Dead. 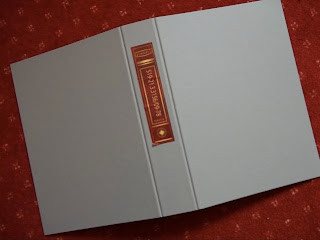 In 2008 I was lucky enough to go on the BBC's Children In Need tours of the Doctor Who studios in Cardiff, touring the sets and meeting the stars. When sadly the time came to leave, attendees were given a souvenir left over from the then latest season's recording of Silence In The Library / Forest Of The Dead by Steven Moffat.

It was this book from the set - it's a 'dummy' book, a dressed binder cover with no internal pages as these were made to fly out from the Library's book shelves during the episode, as seen on screen and explained in the accompanying Doctor Who Confidential. The cover has the prop Library index number and Library logo on the binder's spine. 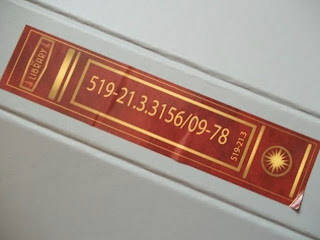 Personally I have never seen such a prominent new series prop come up for sale before, so it would make a great, recognisable and rare collector's item in the programme's 50th anniversary year - happy bidding!

Since listing, I've had a number of good questions asked about this item and so thought it would be helpful to add these points here:

1. I would be happy to provide an accompanying letter with this item confirming how it came to me and what I know of its origins
2. Departing attendees at the studios were told in good faith that they could have one of what were described as these screen-used props - no additional documentary evidence came with it. Viewing the story itself, dozens of these fly from the Library shelves, so watching it you can say "this is one of those" but you can't say "this is that one!"
3. It seems appropriate and just for a charity donation to be made from this auction too, so this is something I shall be doing!

Here we have a fantastic screen used control panel from the David Tennant story "42".

The prop still has its adaptor so it can be plug in to show off the working lights, Tennant can be seen talking into it in the story.

SOLD FOR £375
Here we have a fantastic screen used Transtellar plastic result acetate from the David Tennant story 42.

This original prop is professionally made and highly detailed, would look fantastic suitably displayed.
Posted by Steven Ricks Tailoring at 10:42