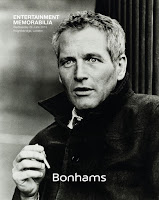 It’s that time of year again and Bonhams are due to hold their latest Entertainment Memorabilia sale in London.

Usually it has a good showing of Doctor Who related items, but this time around it’s a poor offering of only three items, all from series three.

Lot 123
Daleks In Manhattan/Evolution Of The Daleks, 2007,
Andrew Garfield as Frank
a complete costume, comprising;
a flat cap of brown tweed, a khaki wool jacket with pleated breast pocket, a cream shirt with blue and brown stripe, a pair of fingerless gloves, a cream coloured cotton vest bearing several labels inside, a pair of brown wool trousers with braces and a pair of brown leather boots with inscribed label inside 'Frank', with original BBC returns bag (11)
FOOTNOTES
Provenance: Ex-lot 167, Entertainment Memorabilia, Bonhams Knightsbridge, 15th December 2011. Sold for £400 at that time.

Although relatively unknown when starring in this 2007 episode of Doctor Who, Andrew Garfield has more recently starred in The Social Network, Never Let Me Go and as Peter Parker/Spider-Man.

Lot 125
Human Nature/The Family Of Blood, 2007,
David Tennant as the Tenth Doctor
a costume comprising: a three-piece suit, worn during the sequence where the Doctor is hiding under the persona of the Teacher John Smith, comprising a grey/ blue tweed suit with brown/ cream plastic buttons, together with a brown paisley-type tie, all items bearing 1980s Morris Angel & Sons Ltd. labels (4)
FOOTNOTES
Provenance: Ex-lot 174, Entertainment Memorabilia, Bonhams Knightsbridge, 15th December 2011. Sold for £938 at that time.