One recent fixture of the Gallifrey conventions has been Scott Sebring, who provides a photoshoot service to cosplayers and their costumes.

Where most conventions would make a charge and rush people through, Scott (being a fan himself) takes his time to make sure everyone gets the shot they wanted, and does not charge them a cent for doing so!

Using professional lighting and a decent background, he churns out quality shot after shot, giving a gloss to the efforts of every costume maker.

While at Gallifrey I bumped into a couple of people I had made coats for, and they were proudly wearing them too! They weren’t expecting me to be there and were suitably surprised. 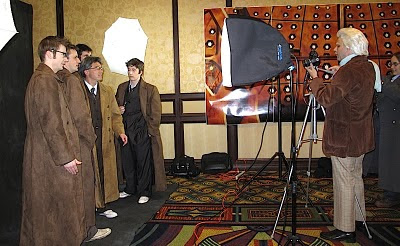 It was an opportunity I could not miss, as when I am asked to make a coat it is done and gone, and two are rarely together at once – this weekend we have FIVE of my coats (including my own).

Scott was dressed in an excellent replica Peter Cushing costume while taking our photos, which was a bit weird, but only added to the atmosphere of the day. 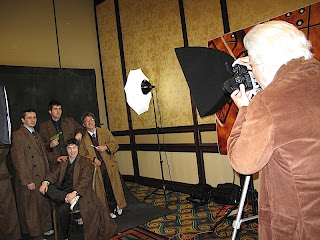 Once we co-ordinated everyone to be at the same place at the same time, we just about squeezed onto the background, and with a bit of nudging up we fitted in frame.

We did three poses:

First we all lined up, trying to keep everyone in frame.
Personally I like the tighter cropped ones towards the end (see below).

We then reformed with Josianne seated, Ramie resting on the back of her chair; Daniel leaving on his shoulder, holding a screen-accurate water pistol; I had my hand on Josianne’s shoulder; and Kevin was engrossed in a Time Lord pocket watch (see left). 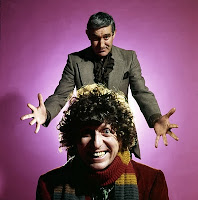 Finally we did a pose to my own suggestion.
I quite like taking a little inspiration from period photographs from Doctor Who, the quirky ones with a bit of thought behind them.

I did a similar thing on Hound Tor, when I based a photo-shoot on an original pose of Sarah Jane from The Time Warrior!

This time round I am inspired by a photo from 1975 of Terry Nation with Tom Baker (see left). As I was the maker of all these coat, I am standing over them – puppet master style! 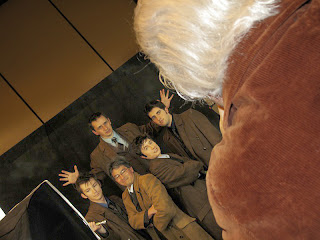 By the end we had some wonderful shots, and I’d like to personally thank Kevin, Josianne, Daniel and Ramie for putting up with endless posing.


Above all I would especially want to thank Scott Sebring for being a fantastic, patient and understanding photographer!

Here are my personal favourites from the shoot.


Posted by Steven Ricks Tailoring at 20:51