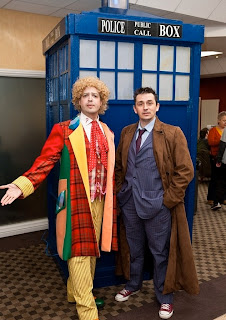 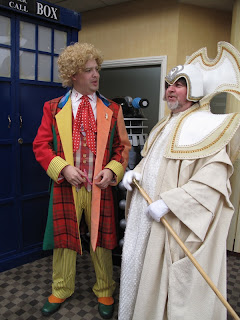 Anyway, fast forward to Time Quest in March 2010, and Bob Mitsch came over, with appropriate costumes for every doctor attending the weekend. I took his lead and went as Ten. There was a core dozen or so other cosplayers, but again the vast majority were in casual t-shirts and jeans. At least this time around I had a few friends to mingle with and not feel too out of place.

I was starting to get the message that cosplay was not as big as I thought it was in the UK!

So coming bang up to date, I could see some stark differences between UK and US events, the main one being cosplay!
The Americans go mad for it!

I felt that at least 50% of attendees in one form or another dressed up – and many of those had costume changes for the afternoon, evening, next day . . . .

At last I felt at home – but was 8,000 away!
And I was made very much at home at that. I met a lot of friends I know through the forums, as well as many who knew me. To say I was warmly received is an understatement, and I left feeling part of a much bigger family than when I arrived. 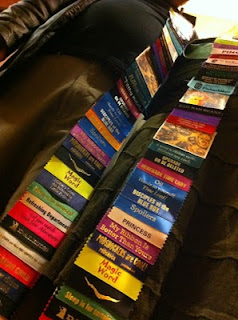 Another thing I discovered was the ribbons. If you’re in the US you will know; if you’re in the UK you’ll probably be in the dark as I was.
I had been chatting to some friends, and a mutual friend of theirs had joined us. Before moving on to chat to someone else he pulled out a short length of wide ribbon and handed it to me. I didn’t quite know what to do. I didn’t have any cash to hand. He asked if I had one to exchange. No – I didn’t have a clue.

The ribbon had a gold-foiled message.

Apparently, you exchange these ribbons like calling cards and they have a peal-off sticky strip at the top allowing you to attach them to the underside of your identity pass. Additional ribbons are added below the previous, making a long trailing strip.
They had all be bought from here, MarcoPromitionalProducts.

As the weekend progressed I saw people walking around with twenty or thirty such ribbons attached, others with just a few. 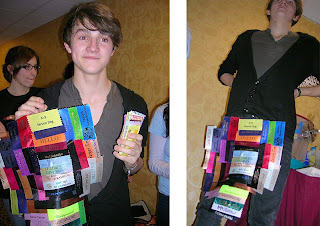 From what I gather the ball had really gotten rolling on this at a previous convention when Tommy Knight attended (see left) and collected enough of these ribbons to make himself what has been described as a kilt, which he wore!

Following his lead everyone got into it big time, and this year it’s bigger than ever!

And it’s possible to collect a LOT or ribbons, cos this convention was well attended. Where in the UK you may get 200, 300, maybe 400 people at a good event, there was in excess of 2,000 people here.

Now, I know America is a bigger place – goes without saying – but it is after all a little olde series from the UK which doesn’t really draw audiences comparable with Desperate Housewives or Mad Men in the US (the broadcast of A Christmas Carol drew 727,000 viewers on BBC America compared with 10.3 million in the UK).

When it comes to conventions, they don’t do things by halves in America!
Posted by Steven Ricks Tailoring at 15:03