Something to look forward to at any Doctor Who convention are the cosplayers and their various costumes on show.

Many come with costume changes or just their one favourite they like to be seen in.

Personally I wore three costumes to Midnight.
On Friday I did my Eleventh Doctor; Saturday was the turn of my Fourth Doctor; and Sunday, when David Tennant was around, I did my Tenth Doctor.

I’ve surprised myself as to how much I like wearing the Fourth Doctor costume, and it goes down well with the fellow cosplayers at conventions.

Around the event there was a good contingent of cosplayers, wearing a good range of costumes.

One thing that struck me was the Amy cosplayers - I only really saw ONE. Has her ship sailed already? I do hope so.

I was quite taken with the Geordie girls who dress as members of UNIT. They were game for a laugh and happy to pose for the cameras. 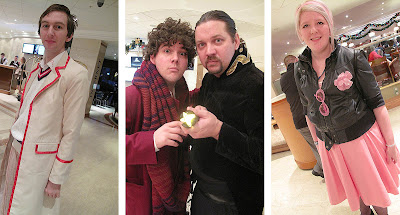 There is a core group of UK cosplayers I have become aware of, who like to keep the classic series alive.
It was great to see good costumes of the Anthony Ainley Master; the Fourth and Fifth Doctors; and a great Sarah Jane and K-9.

There was an unsurprising turn out of Rose cosplay, with the 50s Idiot’s Lantern dress seeming to be the most popular. I did see one very original costume - Dinner Lady Rose from School Reunion! Not sure I’ve seen anyone do that before.

As you’d expect at an event with David Tennant as a guest, the Tens out numbered the Elevens for once. His star still burns bright...

One thing I did notice though was an interesting rise in the femme and crossplay costumes - that is to say either girls dressing as male characters, but with a feminine style; or guys dressed as female characters in full drag.
I’ve seen it discussed at American conventions and a little of it online, but this was my first UK event where I saw it first-hand. 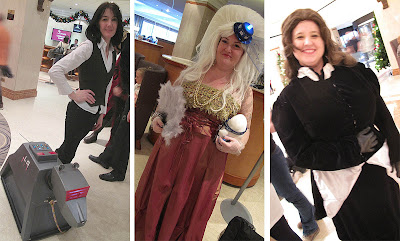 Posted by Steven Ricks Tailoring at 19:44