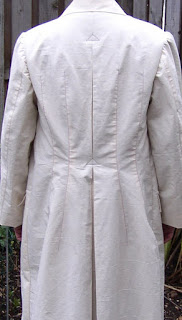 I have finally reach that point with the test coat were suddenly it seems so much more finished and when I try it on for size, it feels a better fit - all in the space of one day’s work!
The technique I use (which I strongly recommend), whereby the panels of the coat are ‘decorated’ with pockets etc in isolation before bringing them all together, does mean you do a lot of work before you see some tangible result. Even then, when the body of the coat is assembled, without the sleeves or lapels sewn it, it hangs even more limp and ill-fitting than you feel it should at that stage.

See embarrassingly frumpy looking pictures of the test coat being worn for the first time. The calico is very stiff, so it is NOT draping right. Still to do are buttons; sleeve linings; sewing the body lining; and hemming the bottom; the collar needs some re-shaping.
Having said that, I think the back of the coat is looking good. The fitting of the coat is difficult, as the back needs to be very tailored and sit tight to the small of the back; compared to the front, which is a lot looser and free hanging. If you look at various publicity stills, it hangs straight down from the shoulder line, without it looking fitted from the front.
The outer pockets have worked out at just the right, comfortable height and they aren’t as awkward to use as I had anticipated. 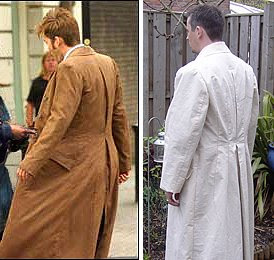 The back vent and tailoring darts are all doing their thing and the cut compares well to the real thing (see left). The vent is just the right height and it is sitting close to the small of the back as hoped.
The split is keeping closed and not splaying out, which it might have done.
The internal pockets have come out as well as I hoped. They are at the right level and the design matches the real thing. They look a little funny in the picture (see below) because the calico around the welts it white, and the finished coat will be brown, and thus less visually obtrusive. 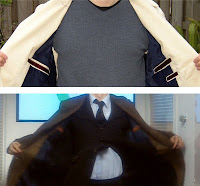 I am also having second thoughts about the solution I came to for the Sonic Screwdriver pocket. It looks a little tacked on as an after-thought, and knowing where I am heading with the rest of the coat (ie 100% perfection) this is steering too far away from that. I need to bring that back on track.

I have come up with a better idea . . . more on that when it comes to it.
I then hemmed the bottom, which on my previous coats had been a bit of a nightmare, but for some reason I had a bit of an epiphany and found my form, making it the neatest coat hem I have ever done. And it was so easy! I don’t know what I had been stressing about. I did is so quick and easily, I didn’t have time for pictures, so I will cover that when I get to that point in the final coat. 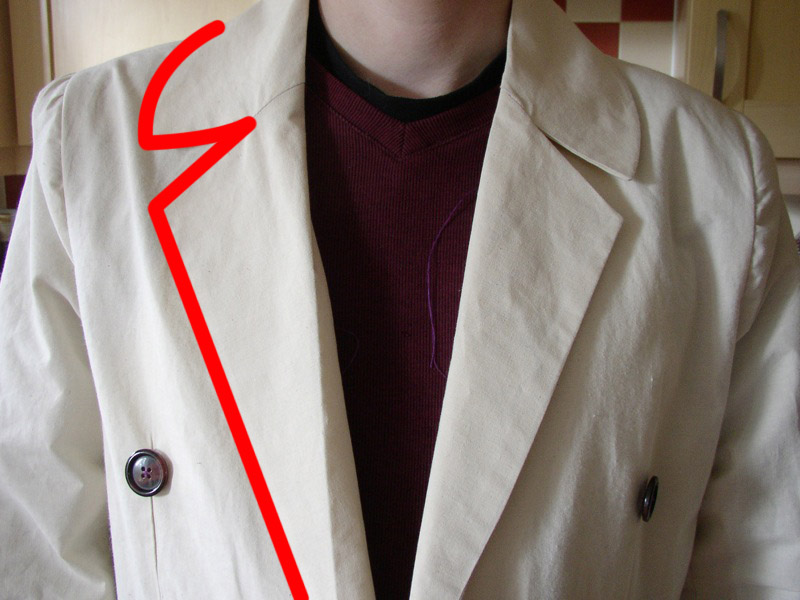 Finally the collar.
This did not initially turn out as planned (see right).
The picture is highlighted in the same way I did in Turning The Other Collar, so you can see the comparison.
I think because I followed my previous pattern for the collar, which through a series of chinese whispers, has become a little detached from the desired goal.
It is too rounded, and the angle between the collar and lapel points is too wide. 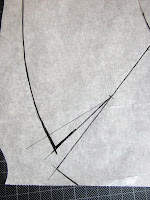 I therefore set about redesigning the collar from scratch.
I laid the collar out flat, and traced it in pencil. I then drew the changes I wanted, closing the angle and lessening the curve away from the point (see left). You can just see the pencil line of the old collar shape.
I then traced over this onto a new sheet of pattern paper, drawing the stitched line, then adding a seam allowance. 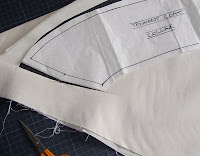 I flipped the guide below to trace the other side.
This was then cut in calico (see right), and did the thing a swore I would never do again: set a collar in all the wrong order!
It was a bit if a mare getting it back in (the old seams were stressed from being pulled around too much) but I got there in the end. 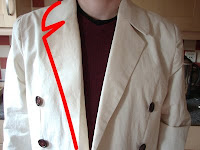 The new collar came out better, but is still not quite right (see left). At this point I decided that I could see where to go with it, and I would slightly amend the pattern before making the Alcantara coat and sort it out at that stage.