I showed last time the back being cut and the origami-like folds needed to create the vent and complex buttoned split. 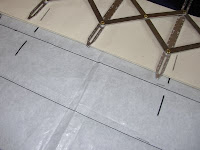 Also stitched in at this initial stage was the lining, which wrapped around the folds of the vent in the back, fully lining it. This then carries on down to the hemline, giving enough lining material to run the length of the hem.
The buttonhole side of the split was then folded and pressed, and the buttonholes marked with my magic spacing tool. 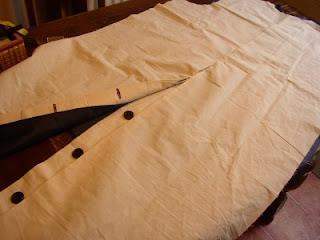 The picture here shows the back being pressed after the buttonholes and buttons were installed. 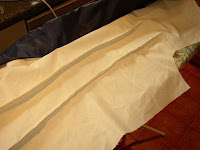 I then tackled the tailoring of the back. Marking the parallel darts either side of the vent is always difficult. The aim is to get them spaced so the sides are divided into three equal widths. It can be a bit hit and miss, as you need to allow for not only the spacing of the darts, but how much material they eat up in the process of sewing them and the seam allowance where the back joins the fronts.

The picture here shows half the back pinned ready for sewing. 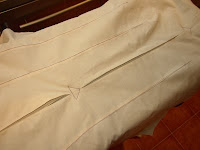 Sewing the darts is actually relatively easy; you just need to starts as tight as you can at one end; drift slowly out to the widest point (closing up around and inch and a half of material); and then back as tight as you can to the other end of the dart.
It is then a case of pressing the darts out firmly and then top stitching them on the vent side of the dart.
The picture here shows the sewn darts being pressed.
That pretty much completes the work on the back, though I later found that I had not tailored it quite enough, so some adjustment was needed, which was feed back to the pattern ready for the final coat.
Posted by Steven Ricks Tailoring at 10:25

Labels: back split, back vent, calico