CHAPTER ONE
After a morning of working on my suit, -click here to read about it- I made a start of the calico test for the coat. I started (as I usually do) with the back. 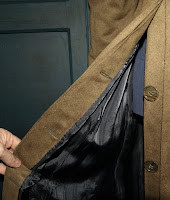 Although for my current coat (the Mk III) I pretty much had the design nailed, there was a subtly about the back split I had not got quite right.
I had originally noticed it in episode or two and tried to do an interpretation of what I could see, but only once I got close-up with the coat at Earl’s Court did I fully understand.
Basically, the back split has the option of buttoning up, with four buttons, the top one of which is always done up. I had seen the buttons in a couple of scenes where the back of The Doctor's coat had billowed out. 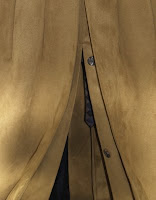 Before Earl’s Court I did not understand how they worked, so I just added a token row of buttons to the then Mk II coat, seen here.
I had long seen that the folds of the vent continued down to the hemline, but had these pleats butting up to each other rather than overlapping, so the buttons had no practical application - they had no buttonholes to join with.
This was because I had been miss-footed (yet again) by Honest Dragon, who had made their coat back out of a single piece of folded fabric. This SEEMS the obvious thing to do, but below the vent it restricts the ability to have more fabric to construct the pleats. 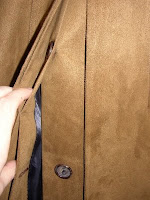 Luckily for the Mk III I had made it in two halves and had made the vent the deepest ever, so I was able to work out how to put it right, and did a 'quick fix' to the Mk III so at least the mechanics of it were correct.
The picture here shows the Mk III quick fix - compare it to the picture of the real coat at the top of this entry.
This is how the real coat works: the right hand pleat goes beyond the halfway seam and laps under the left side pleat. It has four buttons, equally spaced along its height. The left side pleat then has a strip of material on its inside which is attached and intervals. Between these intervals are button holes to correspond withe the buttons on the right pleat.
Anyway, I now have my first oppertunity to make it correctly from the start and see it truly working for the first time.
I had also found out that the lining should be fully lapped around the pleats of the back vent, and pinched into the centre seam to keep it secure it in place.
This would require me to start installing the lining much earlier than I had ever done before.
I would previously have made around 90% of the coat before starting to line it. 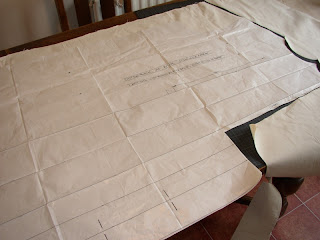 This picture shows one HALF of the back of the coat. (I worked out that after sewing the first back seam and before pleating to create the vent, it measures 46 inches wide!)
You can see the lines of the fold for the vent and button flaps, as well as the marked position of the button holes. 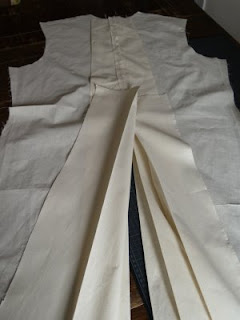 I am able to utilise the same pattern for both sides of the coat, choosing to fold or not fold at certain points to create the pleats as needed.
The left side has a series of narrow creases to build the buttonhole pockets, while the right just has a couple of wider folds to create the flap that buttons to the left side.
Seen here is the back once the pleats are pressed prior to adding buttonholes and lining. 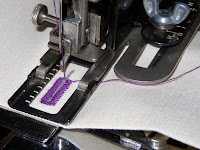 Once I assembled the back, I got to use my buttonhole tool once again. I love using this - it is great fun and a wonder to watch as its clever cranks and pistons turn a simple up and down movement of the needle into a complex motion to create the button hole. As I am making this coat as a test, I made the holes in a contrasting colour to show you it in action. The picture here is a hole halfway made. 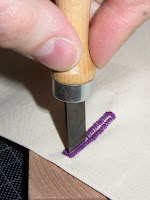 Once the buttonholes are finished, I use a buttonhole chisel to carefully cut the fabric between the parallel lines of stitching.
It only cost a few pounds, and I only use it once in a while, but it is a super little tool, perfect for the job and cuts accurately.
The back came together a treat at all stages and I am very pleased with the result. I'll show you later in the coat's making, once it is attached to the fronts, which I started next.
There are a lot of details and decorations needed for the fronts: the pockets; the buttons; the button holes; plus a couple of tailoring darts. 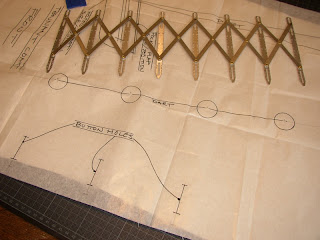 To get the spacing of buttons just right, I recently invested in another little gadget for marking buttons and buttonhole positions. As it expands, the markers move, keeping them equally spaced. It is a luxury, but again worth getting. The number of times I have spent ages measuring button positions, but still got it wrong and been annoyed with myself.

This test coat will also mark the first time I will have a go at making screen accurate outer pockets. 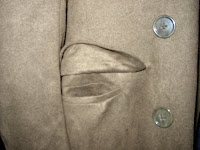 The real pockets are very odd. They have a large pocket flap, roughly 7 inches long and 3 inches deep. Normally this would be built into the upper welt of a pocket that is also 7 inches long. However, The Doctor’s coat has a much narrower pocket set about an inch below the flap. The flap then just covers it, but is 2 or 3 inches wider than the pocket itself. You can see it here in this photo.
I have marked this on my pattern, which I will be following as close as I can.
I have found it best to put all these in place before assembling the body of the coat. It is SO much easier working with a smaller flat piece of fabric rather than trying to get the entire coat under the sewing machine. 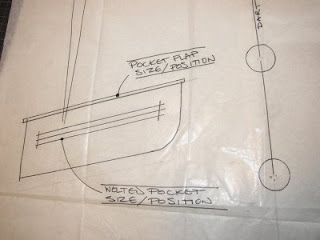 I finished my weekend by cutting the fronts and sewing the long darts which run under the line of buttons, as well as a small under arm dart that runs down to the pocket (you can see the narrow V of this above the pocket on the pattern). I also took the time to cut the sleeves.
This sets me up nicely to get ready to do lots of pockets next weekend . . . .  how I love doing welted pockets!!!
Posted by Steven Ricks Tailoring at 19:02