Travels with my TARDIS

I thought I would just throw this in as an aside in the blog.

In July 2008 I went to Crich Tramway Museum with my Step-Father, who is an avid restorer of vintage buses, especially ones built by Leyland. His oldest bus was built in 1908, so last year it was one hundred years old, so a weekend event was organised to celebrate this and the eight or so other restored buses dating up to 1925 or so. Here is a pic of just four of his buses. 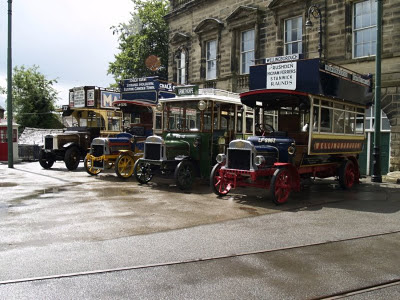 This was the very first time that all his buses had been together at the same place at the same time, as most of them live in transport museums around the UK most of their time.
It was quite a sight to see them together.

Anyway, Crich Tramway Museum is a living museum. They have various trams and buses there that have been rescued from here there and everywhere, as well as some buildings that have been saved form demolition. The build the buses are seen in front of WAS the town hall of a Yorkshire town, and the facade was transported and rebuilt brick by brick at Crich.

The trams are staffed by volunteers, who dress in period costume and take your ticket for the tram, giving a real feeling of being back in time to the Edwardian era. 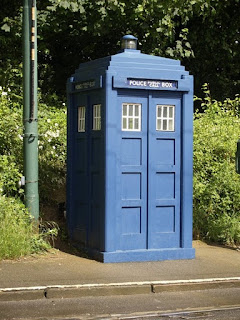 There is also a pub and tea room, which again the facades were saved and moved to Crich. Last time I visited (some 10 years ago) there was nothing behind these facades, but since then they have built a fully working pub and tea room, where you can go to get refreshment, or for us last year, shelter from the heavy rain that spoilt most of the day there.

Now to the point. One of the buildings rescued is an original Police Box! So I was keen to get along and have some nice pictures of my in the Mk III coat!

Being original, the box is much more like the one seen during the early Hartnall episodes.

The door looks like it has either been messed around with, or was not quite a 'pure' in design as the TARDIS, as the right hand door does not have the proper recessed paneling as seen elsewhere on the box.

Here are the rest of the pictures I took - again, no, I have no shame! 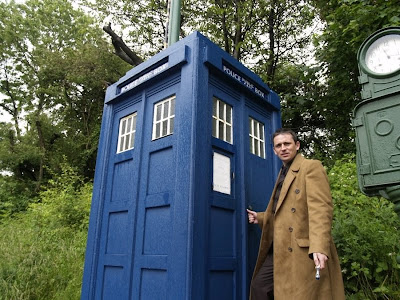 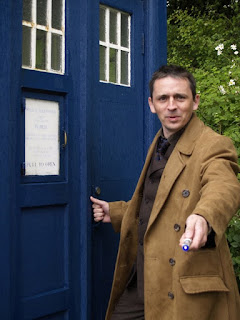 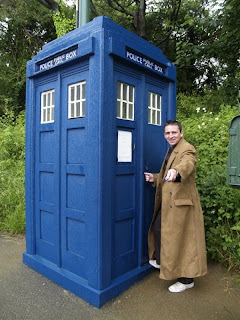 Finally, if you are interested in visiting Crich, and shamelessly get your picture taken with this Police Box, visit this site:

Crich Tramway Museum home page
Here is a site dedicated to Police Boxes:
police-box.co.uk
This is a real good resource as well:
The TARDIS library
Lastly, here is the Wikipedia page for Police Boxes:
Wikipedia.org/Police_box
Posted by Steven Ricks Tailoring at 17:38