The Mk II - I'm a perfectionist, it's still not right!

Well, by the title of this post you may well guess that I was STILL not happy with my coat. I started to spot a couple of minor things which I thought I could improve on, which were niggling me. But then I spotted something that made me realise that I had slightly missed the point of an aspect of the assembly of the coat. 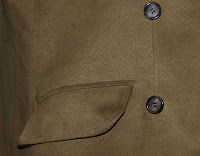 THE BUTTONS
The first minor thing niggling me was that I spotted the buttons I had used were just not big enough.
I had bought traditional 1 inch (25mm) buttons (see pic), but looking at a pic I took of the coat in Manchester, they were clearly bigger (see pic). It not by much, but once I noticed, it made all the difference for me!
I trawled the internet from pillar to post to find larger ones but they were strangely elusive. I could find 28mm in plain colours, but not in a horn finish. Widening my globally I just could not find them - it was bizarre!
After a month or two I tracked some down to a old-fashioned button shop not far from Oxford Street in London. I soon swapped the buttons over, but there were still a few other things that needed fixing in my eyes . . . .
THE BACK
There is a shot in Utopia, where The Doctor rushes to a porthole in a door, desperate to get through. As he does so, the coat rides up and the back slit opens to show some clues to how it was made. 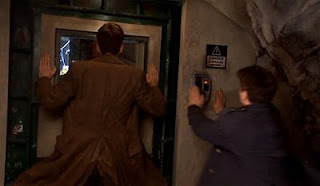 It has two pleats which overlap each other, and then can (but do not) button together.
My current coat had these two pleats butting up to each other, not overlapping. 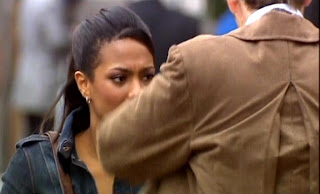 I also spotted a seam down the centre inside the gusset on the back. That meant it was made of two pecies of fabric, not one like I had been doing.
THE LAPELS

Although I had improved on the cut of my lapels and collar, I had noticed that the angles were just not quite right. My lapels (the below the notch) were fine, but the collar (above the notch) needed adjustment.

These photos show what I mean. My collar points are very acute. The real coat is a lot more square. I could see what needed to be done, but it was something that I did not have the skill to adjust on the existing coat - I would need to make a new one! 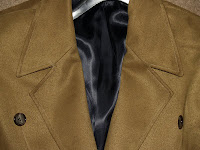 So - I put the Mk II up for sale!
dw_cosplay - Mk II up for sale
There were no takers from dw_cosplay, but after it appearing on eBay, I found a buyer. They got a bargain in my opinion - they paid less than HALF the material costs. Still, I got some money to put towards the Mk III . . . . .
Posted by Steven Ricks Tailoring at 17:22