The Mk II coat - getting a better fabric

Not put off my the disaster (let's face it) of the Mk I, I set about researching a bit better for the next one.
I trawled the internet searching for faux suede, firstly cheaper and secondly a better colour.
All I could find in a brown was either a oatmeal/beige or a mocca/chocolate with nothing in between. Besides, 99% of them were real lightweight, only a few grades above a silk - and real man-made fibres too. The type that gives off flashing in the dark if you take a jumper off too quickly.
I had companies from far and wide sending me swatches in the vein hope that one of them must match.
Then I came across Malabar - ironically through one of those annoying sidebar ads on eBay.
They had a good range of colours, in a decent weight with a good suede finish to it AND in a colour that was somewhere near what I wanted.
MALABAR - Shamios range
Now, the swatches on their website looks NOTHING like the actual material. I almost passed on the one I eventually went for, thinking it was too light and just wrong.
MALABAR - shamios - Walnut 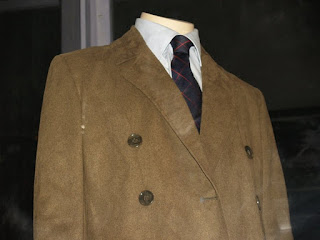 At this point I was also looking at picture after picture of THE coat and finding that sometimes it looked a mustard colour, sometimes even a slight olive to it. You could almost find at least one picture that could match whatever mid-brown fabric you had tracked down. So i decided the best thing to do was go and see THE coat and take my swatches with me!
As it happened, it was on display at the Manchester exhibition at the time, so we made the 400 mile or so trip to see it.
It was on display in a spinning glass case shaped like the TARDIS. This was the same display that had been used in the original exhibition in Brighton a year or so earlier.
It was very hard to tell, since I had to hold up my swatches and wait for the coat to fly past, bathed in coloured light, with a reflective glass between the swatch and the coat. 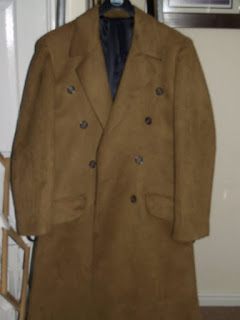 But even then, under those conditions I could see the Malabar fabric was a real good match - the absolute best I had found so far.
Above is one of the pictures I took at that time, and right is a picture of my finished Mk II. I think it looks pretty good.
Besides, the Malabar fabric was only £20 a metre - so quite a bit cheaper than what I had been paying.
The next problem I needed to tackle was getting a better pattern and getting better tailoring skills . . . . .
Posted by Steven Ricks Tailoring at 08:46