I can't hide the fact that I was dead chuffed with how the Mk II came out! 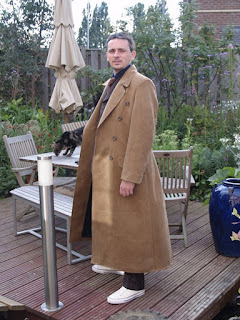 It had all come together - it all happened - it felt right and the result was worth showing off.

I started wearing it to work, enjoying swishing along the streets to work!

I posted some pictures of it on the dw_cosplay forum, and got some real nice comments back. They are a right nice bunch on there - always supportive of each other and full of ideas to swap and tales to tell. 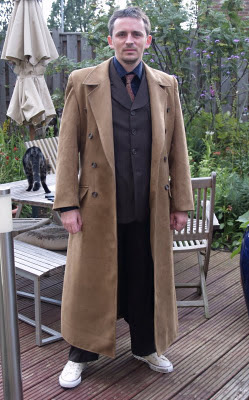 I shared with them pics of my Colin Baker coat as well.

Not long after finishing the Tennant coat, I proudly wore it to the Star Wars Celebration in July 2007 at London's ExCeL centre. I felt a bit of a fraud - going to a Star Wars event dressed as Doctor Who - but what the hell!

As it turned out, it was worth doing, as one of the stands had Colin Baker signing autographs. He instantly recognised what I was wearing and was more than happy to come out from behind his signing desk and pose for a photo. We chatted for a while (his queue was not long) and he is a very amiable chap. 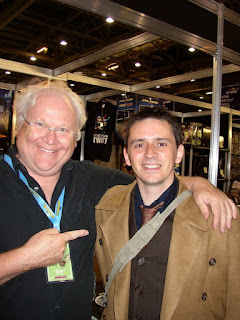 Walking around the event I had quite a few people - especially kids - note what I was wearing. Adults giving me a smile and a nod, the kids getting all excited and pointing me out to their parents. As I passed one stand, which sold leather made belts etc, I was stopped by a guy who worked there. He was real gushing about my coat and just loved it. He was asking who made it, how long it took to make etc etc etc. Then he says 'So, it's from Firefly, right?' Great! Brilliant! Worth all my effort then! Thanks for that . . . .

Posted by Steven Ricks Tailoring at 16:21