The Mk III - nearly there

Now I had identified some issues with my Mk II, I set about re-cutting the pattern to get it even closer to the real thing. 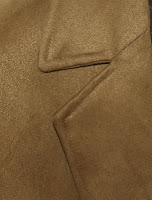 I spent a lot of time working on the collar shape.
I got the point of the collar less acute, at a more 80degree angle rather than the 45degree I had on the Mk II.
I also added a little trick to get the topstitching around the collar and lapel to look better. I sewing in a very narrow strip of padding along the seam line so when the topstitching was added, it looked a little deeper (see pictures here comparing the Mk II and Mk III). 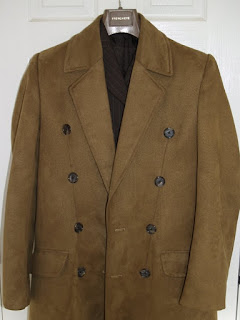 Overall I was much happier with the result. I was now breezing the welted pockets!
I corrected a minor issue with the tailoring of the fronts. It is along this line that the buttons are sewn. On the Mk II I had this seam as a little curved, where it should have been dead straight.
I corrected the pleats in the back, making it even closer to the real thing.
However, the exhibition was in town (at Earl's Court) and this time it was up close - and personal!
It wasn't long before I took a trip there to find THE coat not only on display, but this time not in a glass case. this time you could touch it!
This opened a couple of cans of worms . . . .
Posted by Steven Ricks Tailoring at 19:52