Having now completed work on the back, I moved on to sorting out the outer pockets of the coat.

At first glance they look like conventional pockets, but as I said before, this is no conventional coat, so these pockets are far from standard in their design. 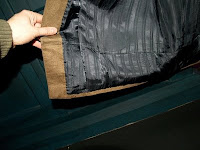 When I first saw the coat when it was on display at Manchester, I quickly realized it was the coat referred to in the book Doctor Who: The Inside Story. There is a section that discusses the costume for David Tennant and recalls a story that the coat was planned as being long, but producer Phil Collinson thought differently and personally asked for 6 inches to be cut off the length. The moment he saw the result he saw the error of his judgment and conceded that it should be longer as planned.
This hesitation in the length is clearly visible on the display coat, as the bottom 6 inches have been reattached, leaving an ugly seam all round the coat.
I therefore took with a pinch of salt some of the other details in the coat. For example, the shape of the lapels is not quite the same as on screen: they are not as wide and the angle the collar meets the lapels is wider. So what I observed on the outer pocket design made me think they had installed one design of pocket then changed their minds and had done a quick-fix change to represent the final intention. 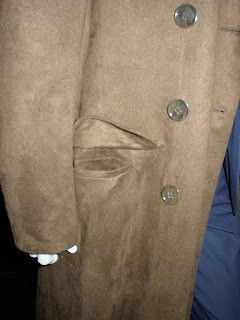 This detail picture of the pocket, shows what I mean.
The pocket is single welted, about 5 inches wide. Sited about an inch above the pocket is a surface-sewn pocket flap, around 7.5 by 3 inches in size.
This is unusual as conventionally the flap would be sewn in with an upper welt, running the width of the pocket.
All my coats to date had been sewn with 'conventional' pockets. 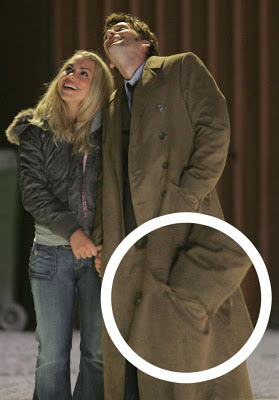 However, I recently came across a couple of stills which, knowing the structure of this un-conventional pocket, clearly shows the screen used coat does have this peculiar arrangement.
If you look closely, the flap behind the sleeve, is not flapped up; the pocket his hand is in is clearly not as wide as the flap - all consistent with the odd design.


When it comes to replicating this, it is, if anything, easier than the pockets I have been doing to date! 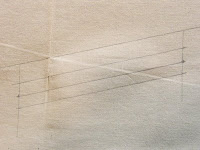 Previously I had cut the flap to the exact width of the pocket, and had on occasions needed to re-cut the flap because I had gotten it slightly wrong - there wasn't much tolerance for error.
This time I marked the pocket position in pencil, as seen here. 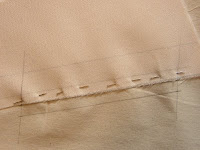 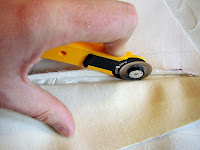 Once they are sewn, I then slit the work between the welt and pocket back, stopping about an inch short of the ends, and then snip a small cut to the ends of the lines of stitching, going as close as I dare without cutting the thread, making a sort of Y shaped cut. The little triangle this makes becomes critical later.
The picture here shows me using my rotary cutter to slit the pocket hole. 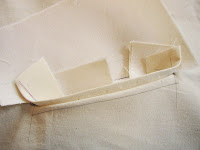 The welt and pocket back are then turned backwards through the hole, becoming the right way up in the process, and magically falling into place. I love this bit; so long as you have pinned and sewn the pieces in place correctly, it all just suddenly happens!
The picture here show the welts being turned.
The pocket is then pressed, being careful not to over press.
The lining is then looped around between the front welt and the pocket back, before sewing a vertical line each side to box the pocket lining off. 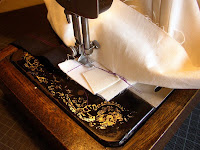 It is critical when doing this that the tiny triangle of fabric made when cutting the pocket slit is caught by the line of stitching. Seen here. I go several times over it to make sure it is secure, otherwise it will fray and weaken the corner of the pocket. This is then very difficult to repair later. 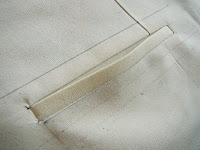 The finished pocket can be seen here.
Above the pocket you can see another pencil line; this is marking the position of the pocket flap, which is cut to size; interfaced with iron-on interfacing; then sewn together and top-stitched to form the flap.
The flap is then top stitched onto the work in the same manner as the breast pocket I recently did for the suit - which you can read here:
Making My Tennant Suit: Starting work on the suit
And here is the completed pocket, with separate flap above. 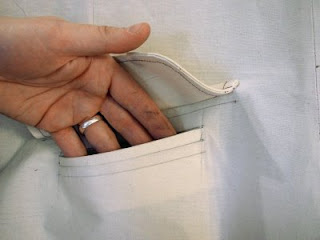 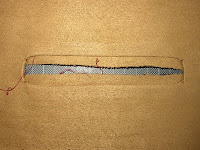 I hope that made sense! Doing your first welted pocket is nerve-raking, but once you have cracked it, they are dead easy. Seen here is the very first ever test one I did on a scrap of spare fabric.
Here is also a real good website which shows a fuller step-by-step guide to doing welted pockets, with very clear photographs. They explain it better than me.
Welted pocket construction
Posted by Steven Ricks Tailoring at 11:23