Panic over a seam I did not know about!

Next thing to tackle, which took most of a day last weekend, were the fronts. Initially I thought this was going to be nice and easy, but then I had to go and make it difficult for myself! 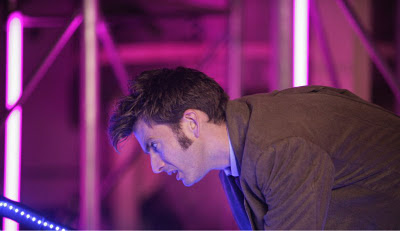 I had long studied the coat, and thought I was familiar with every single seam and tailoring dart it contained. While I was writing a previous blog entry about the sleeves, I posted a cropped vserion of a picture to show the detail of top-stitching on the back darts (see above). What I spotted in the picture - slightly to my horror - was that there are two tailoring darts in the front half of the coat, under the arms running down to the tops of the pocket flaps.
I have tried to make it a bit clearer here (see above) by labeling the darts and seams.
I had long known that there was at least one there, but had only included it in my pattern when I got to the calico test coat, which I was just finishing at the time (I had noticed it not long after finishing the Mk III.)
I realized that in all the pictures I had seen to date, David’s arm had covered the back dart when seen from the front; and covered the font dart when seen from the back; I had never seen a picture showing BOTH darts together, until now.
So, what do I do? Ignore it and pretend it isn’t there? Note it for next time? But since this will be my Ultimate coat, there won’t be a next time, and it will niggle at me later - believe me, I know me! 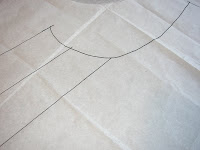 So, taking a deep breathe, I set about recutting the pattern for the front.
First I traced the finished shape of the under arm and armhole area in black felt pen. I then drew a line for each of the darts I wanted to create (see left). 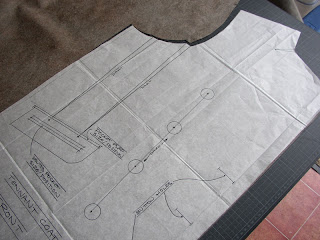 Then I put my pattern paper over the top and traced the armhole from the shoulder down to the first dart, plus the first dart line; I then pivot the guide underneath around the bottom of the dart and trace the short section of armhole between the two darts, plus the second dart line; I then pivot around the second dart to the finish the rest of the shape to the side seam; I then followed the rest of the existing pattern for the front.
I did a quick calico check of just the front, sewing the darts to make sure it did not distort the shape too much. Everything seemed fine, so I cut it in Alcantara (see above). I would later discover that these darts do help fit the underarm area, which may explain why the calico coat did look a little shapeless from the front (see I’ve finished the calico coat) making this change of tack worthwhile. 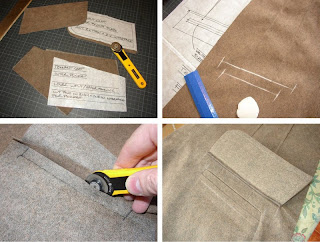 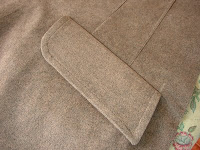 The finished result is a nice sharp and neat pocket, flap and underarm darts which I sewed so they hit the flap, but evaporate before the reach the welted pocket (see right).
Then to make things easier for myself, I take advantage of the coat not being finished (and as a result bulky) to sew the buttons on. These line exactly down the front tailoring dart.
Posted by Steven Ricks Tailoring at 14:34